Robert Perry has played/composed and taught many different types of music in his long career. However, Periscope Ensemble is the most exciting because we are all moving forward to some beautiful unknown place. Very exciting!
Perry’s original inspiration as a composer was Graham Collier OBE (1937 – 2011).  His resonance was his aim to provide an opportunity for musicians to make choices in performance.

Perry was the composer for the Gloucester Mystery Plays. Cotswold Life interview…Read the interview here.
Perry finished a book of piano music of 12 Periscope tunes inspired by people I have met on my journey here. Purchase Portraits piano music book here.
Perry has worked and collaborated with many different art forms including Cheltenham Poetry Festival founder, Anns Saunders.
Two CD’s (one was Radio 3 broadcasted) Insomnia poems with Pete M Wyer and Steve Dalachinsky. Links to both are here…

Matthew Morris has performed many of Robert’s compositions over the 15 years they have known each other. Matthew has also performed with:
The Royal Academy of Music Royal Academy Big Band London Jazz Orchestra with Scott Strommen National Youth Jazz Orchestra 1994 Glenn Miller Memorial Big Band (European Tours and TV broadcasts)
One Year’s residency at the Bull’s Head Barnes with SEMA and Trio 1

Katie started out as an author and illustrator of children’s music books, helping thousands of children learn how to read and write music using cartoon slugs. She later became a jazz pianist, flautist and composer, recorded an album of original piano music, worked as the accompanist for a improvised comedy show and toured theatres playing keyboards to hits from the 1970s (in a range of unlikely outfits). These days, she’s most often found at Little Challenges – a place to find ideas, inspiration and practical tools to help make the ‘messy’ business of being human just a little bit easier – happily inventing things and hosting the Adventures in Behaviour Change podcast.

Andrew McKenzie is a regular with the Stroud jazz sessions where he has played with many top names in the jazz world. He and Robert have played in many different ensembles over the 10 years or more they have known each other.

Emma started to play the drums when she was 11. She initially trained in a marching band on the snare drum, before subsequently moving on to playing the full kit in bands and orchestras both in and outside of school. Emma moved to Bristol in 2014 that she began to pursue a new career exclusively in music. Shortly after arriving, she became the house drummer for the Leftbank jam band before going on to play in a multitude of ensembles throughout the City. Many of these she continues to play with today including THE WORLD GOVERNMENT, ATHEA with Paul Bradley, HEGEMONO, STARLINGS, RED ROOTS JAZZ, HENRY SLIM, RUBY TWO SHOES, PERISCOPE ENSEMBLE and more recently THE SOUNDS OF URSA fronted by Helen Stanley of Crippled Black Phoenix.

Since her debut at the Royal Festival Hall in Feb 2002, Eve Loiseau has given recitals in England, New York & France and has featured on BBC R3, WNYC Radio, PMW Music and the BBC production, The Roman Mysteries.
Eve Loiseau performs a charismatic homage to Edith Piaf, the celebrated French singer, touring internationally since 2012 with Piaf the Songs.

Actor and voice artist. Recent work has taken Benedict Perkins from the west end stage, for a revival of ‘Up Pompeii’, to an exotic Soho recording studio with some Hollywood heavyweights for the audio drama ‘Passport to Oblivion’. One of the original line-up of ‘I’m sorry, I’ll read that again… again’, who will headline and close the Bristol Slapstick Festival in 2020. Ben’s worked with all sorts of Goodies (including the Graeme Garden variety, as well as everyone’s favourite Australian James Bond) and baddies in his capacity as a semi-professional show-off; the ugly truth is, wherever there’s a microphone or a stage, and musical fun and games to be had, Ben’s likely to bring his bizarre and unpredictable Hugh-Grant-meets-Brian-Blessed-with-a-dash-of-Little-Richard shtick to the party. And nobody throws a party like the Periscope Ensemble – Ben’s humbled and overjoyed to bring his modest talents along as a contributor. One of these days, and you’ll want to be there when it happens, it’ll be worth the wait, Ben’s shyness in the face of Evelyne’s spectacular vocal talents will give way to a burst of inspiration and he may actually sing, too. 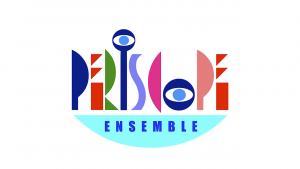